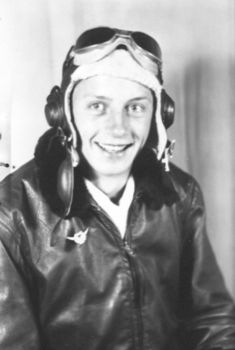 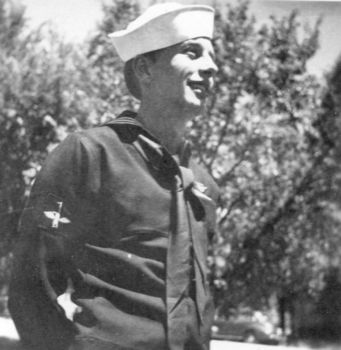 I was 21 years old and aboard ship in the Pacific. When we weren't bombing Japan, we played Acey Deucey. It's a good game and it eased the troubles of war.

The ship was an aircraft carrier with a flight deck of 900 feet. My job was a tail-gunner on a TBF: A pilot, a radioman, and the tail-gunner who protected the rear with a 50 caliber gun. It was damn scary. The pilot would climb, dive, and turn at high speed. The anti-aircraft fire would burst around the plane and its smoke would make a thick fog. Whenever we went down to drop a bomb, I would strafe the ground and fire at anything that moved. Damn scary and you never got used to it. Flights would last for 4 to 6 hours and I made over 60 of them. We cruised all around the Pacific: Hawaii, Majuro, Guadalcanal, New Hebrides, Guam, New Zealand, Archipelago, but I'll never forget those bombings over Kuri, Japan. When the war was over, we flew 2 prisoner of war drops and in the victory air parade over Tokyo.

After a flight we would clean our guns and then go to sick bay for a glass of brandy to calm our nerves. On the days when we didn't fly and had no duties, we occupied most of our time by shooting the bull and playing poker, bridge, craps, and Acey Deucey. There was nothing else to do. If we hadn't had these games, the boredom would have been intolerable. The "ready room" was where we got ready for flights and also where we played these games. Poker, bridge, and craps were always played for money. I once won $800 at poker and then lost most of it playing craps.

Acey Deucey was never played for money. Often we would play it outside on the steel deck of the fantail, the rear of the ship. The boards were made of hammock canvas and marked with paint. Washers of iron and brass were used for the counters. There were usually 3 or 4 boards on the fantail with 20 to 25 guys either playing or giving advice. Whenever a 1-2 was thrown with the dice, the thrower and his advisers would gleefully yell "Acey Deucey" and his opponent would curse at them all.

Can you imagine the scene? Twenty five young sailors, wearing dungarees with their names on their back, thousands of miles from home, on the rear deck of an aircraft carrier, all playing Acey Deucey with absorbed interest, yelling and cursing, jumping up and down, and gladfully forgetting, for a while, the pain, the fright, the troubles of war.

by Allan Bjornstad
as told to his son, Jon

How to Play Acey Deucy

You will need: The six points on the left are called the fantail.

Players take their turns throwing the dice and moving their men.

The men are entered on your fantail and then moved around and across the board to your opponent's fantail. When all 15 of your men are within his fantail, you begin to take them off.

The player to take all of his men off first wins.

The following was taken from http://www.play65.com/AceyDeucey.html.

American Acey-Deucey is a variant of backgammon that has been played by the U.S. Navy since the early 1900s. The game probably stems from similar variants played in the Middle-East or other countries around the Mediterranean Sea, such as Greece and Turkey, games in which all the checkers start off the board or all on the furthest point of the board.

Though generally recorded as being played since World War 1 (1914-1918) at least one photo in a Department of Navy album shows two Chief Petty Officers enjoying a game of Acey-Deucey some years before that on the deck of the USS Baltimore, circa 1904-06.

Also mentioned in the same Navy journal (which is currently offline) is that playing Acey-Deucey was one way Navy pilots killed time before going on a mission.

In fact, Acey-Deucey Clubs and Lounges have existed in the Navy and are mentioned in the "Glossary of Military Terminology, Jargon, and Slang" compiled and edited by Jeff Crowell where it describes an "Acey-Deucey Club" as a club "for E-5 and E-6 enlisteds (Second- and First-Class Petty Officers USN)".

Crowell's Glossary also defines Acey-Deucey as a version of the board Backgammon game "traditionally played in off-duty hours". Needless to say, it was not only officers that got hooked on the game nor was it only during off-duty time that seafarers got the fever to "roll the bones" - many a sailor loved to escape for an extended lunchtime session of Acey-Deucey using something like this line that a former sailor reminisced about in an online forum, "Chief, I'm going to the Squadron to check on (fill in the blank) and I'll be back after lunch."

Back in 1930, after Time magazine had just published an article about Backgammon, Louis J. Glaser, a former WW1 sailor wrote a Letter to the Editor in which he said that Acey-Deucey was played on "the deck, below decks, in the engine room, the dynamo room and in the turrets and handling rooms."

Glaser also remarked he never saw sailors play Acey-Deucey for money, but that they did for poker and craps and that a "lot of money" changed hands around payday. He also noted that Marines would get into the poker and craps action but did not seem to mix when it came to backgammon. Glaser added that Acey-Deucey was distinctly a Navy game because he never saw the game, or heard of it, during 21 months he also served in the Army.

So how do sailors handle the motion on the ocean? Those checkers must slide everywhere when the seas are rough. Well, the Lingo section of the Blue Ridge Navy Journal remarks that the cognoscenti knew Acey-Deucey as ace-deuce and defines it as:

"Backgammon game as played by sailors. The basic difference is that the game starts with no pieces on the board, and the dice are thrown in a dice chute screwed down to the playing table, as is the board. The board, of course, has a wooden lip around to prevent the pieces from sliding onto the deck when the ship rolls. It's considered unsporting to use any subtle strategy in "ace-deuce," a tradition perhaps stemming from the pieces' disinclination to stay in place..."